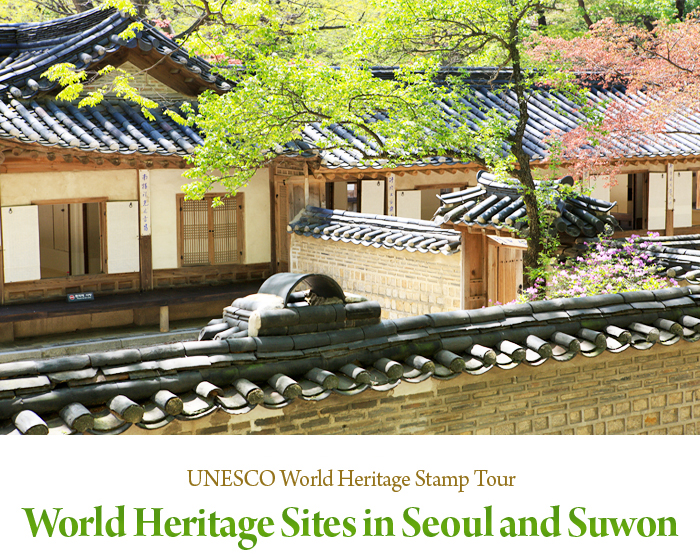 World Heritage Sites are places designated by UNESCO that have outstanding universal cultural value. Korea is home to 11 World Heritage Sites, which include the Seokguram Grotto, Bulguksa Temple, Haeinsa Temple Janggyeong Panjeon, Jongmyo Shrine, Andong Hahoe Village, and Gyeongju Yangdong Village. Though the various sites are scattered across Korea, to help motivate visitors to see them all, the Korea World Cultural Heritage Site Pilgrimage Certificate Program offers foreign visitors a chance to collect stamps at any of the sites recommended by the KTO and redeem them for a commemorative prize. The program will operate until December 2015, and participation is easy. Simply visit the Korea Tourism Organization Tourist Information Center Seoul Office, fill out a registration form, and you will be issued a world cultural heritage site pilgrimage visa and passport. There are ten sites participating in the campaign, but the volcanic island of Jeju-do and its lava tubes are not included. Once you complete the stamp tour, visit the Korea Tourism Organization Tourist Information Center again to receive a certificate and prize. In this article, we will highlight the sites located in Seoul and Suwon.

One enters Changdeokgung Palace after passing through Donhwamun Gate, the oldest surviving royal palace gate to date, and crossing Geumcheongyo Bridge, which is over 600 years. Upon entering the palace grounds, the first building to be seen is Injeongjeon Hall, which is the main hall of Changdeokgung Palace. Meaning “a place for wise politics,” Injeongjeon Hall is where the king held morning assemblies with his subjects, received foreign diplomats, took part in coronation ceremonies, royal weddings, and other royal events. Jojeong, which is the expansive yard in front of Injeongjeon Hall, is where the morning assemblies were held. The yard is covered with big, flat stones and two rows of tombstone-like slabs running down the center of the yard. The stone slabs indicated the ranks of court officials who stood by them. Also inside Changdeokgung Palace is Huijeongdang Hall, the private quarters of the king and later a place where the king handled official business, Seonjeongjeon, and Daejojeon Hall, where the queen lived. 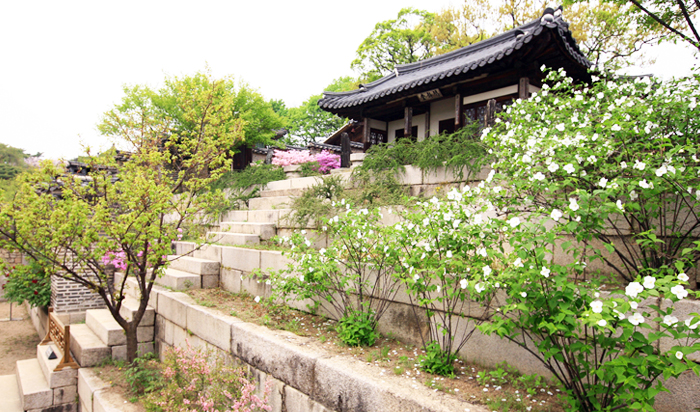 Just a few steps away from the path leading to Huwon (Secret Garden) are the Nakseonjae premises. Adjacent to Changgyeonggung Palace, Nakseonjae was built as the study and living quarters of King Heonjong (24th King of the Joseon Dynasty, r. 1827-1849). Visitors can view the backyard of Nakseonjae, which has been opened since 2014. The backyard features a beautiful terraced flower garden. In the spring, the area blooms with apricot, cherry, and peony flowers.

Known as the Secret Garden, Huwon is one of the most attractive and must-see sites in Changdeokgung Palace. Huwon is a traditional garden built seamlessly amongst the surrounding natural environment and was a place where the king and his royal family relaxed, contemplated, read books and studied.

The entire area of Huwon is divided into four zones, the first being Buyongjeong. This includes Buyongji Pond, which sits harmoniously with Buyongjeong, Juhapnu Pavilion, Eosumun Gate, and Yeonghwadang Hall. Standing above the square-shaped pond is Buyeongjeong. On the other side, the two-storied Juhapnu Pavilion stands at the top of a five-story terraced garden. 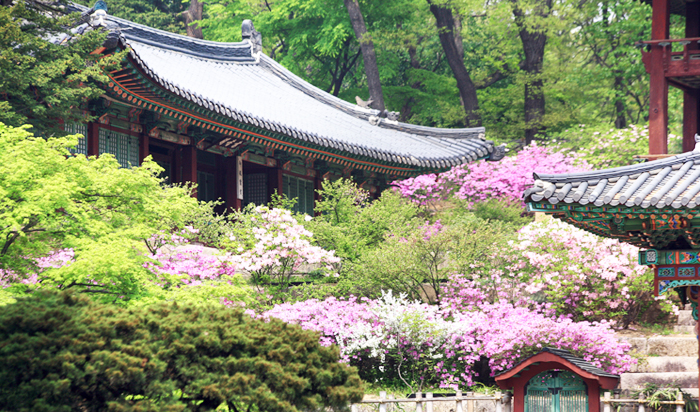 Huwon is open for special viewings only. There are 15 viewings organized every day for visitors to take guided tours available in Korean, English, Japanese, and Chinese. Each viewing is limited to 100 persons, and visitors are advised to make an online reservation well in advance.

Jongmyo Shrine, where the spirits of the Joseon royalty are enshrined

When the Joseon Dynasty was established after the fall of the Goryeo Dynasty, a number of new buildings were constructed to symbolize the foundation of the new state. Gyeongbokgung Palace and Hanyangdoseong Fortress were built, followed by the altar to the state deities to the right of the palace and Jongmyo Shrine. Jongmyo Shrine enshrines the ancestral tablets of the kings and queens of the Joseon Dynasty. The shrine was registered as a UNESCO World Heritage site in 1995. Jongmyo Shrine is largely divided into Jeongjeon and Yeongnyeongjeon Halls. Jeongjeon Hall is home to the tablets of 19 kings and 30 queens, while Yeongnyeongjeon Hall is home to 15 kings and 17 queens, plus the son of Emperor Gojong who was the last ruler of the Joseon Dynasty. The kings of the Joseon Dynasty held memorial services to their ancestors in Jongmyo Shrine. Because of the kings’ attendance, the memorial services were quite grand. The Jongmyo Jeryeak, which is music played during these memorial services, was listed as a UNESCO Intangible Cultural Heritage in 2001. Nowadays, the Jongmyo Jerye royal ancestral rites are held every year on the first Sunday of May following the lunar calendar. 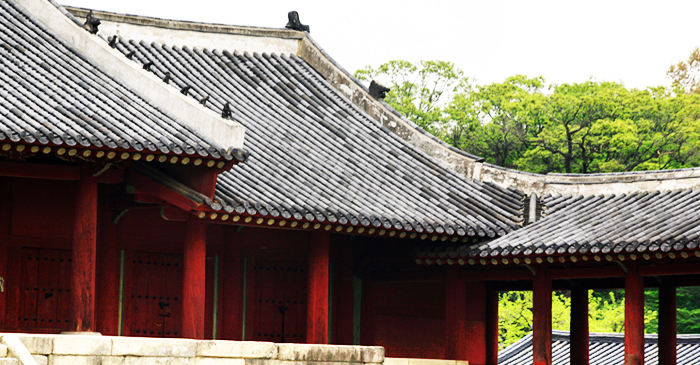 Seolleung and Jeongneung Royal Tombs are situated right in the heart of Seoul’s Gangnam District. Seolleung is the site of the royal tombs of King Seongjong (19th King of Joseon) and his Queen Jeonghyeonwanghu. Jeongneung is the site of the royal tomb of King Jungjong (11th King of Joseon). Past the ticket booth, Seolleung is to the left, and Jeongneung is to the right. Whichever direction one takes, the path is circular and comes back to the ticket booth. However, one should note that the History and Culture Center is situated on the Jeongneung side and close to the entrance gate. At the History and Culture Center, visitors can watch a video on the history of the royal tombs of the Joseon Dynasty, the state funerals, and how the tombs were built. Seolleung is also a great place for relaxation and walks for people living in the city. The forest trail connecting Seolleung to Jeongneung is about 3.5 kilometers long and takes approximately an hour to walk the full path. Don’t forget to get your World Heritage Stamp at the History and Culture Center.

The first place to visit prior to going to the Suwon Hwaseong Fortress is the Suwon Hwaseong Museum. There, visitors can learn about how the fortress was built through various models and exhibits. Visitors can pick up a free audio guide at the information desk and take a self-guided tour around the museum. The audio guide is available in Korean, English, Chinese, and Japanese, but an identification card or passport is required to use them. 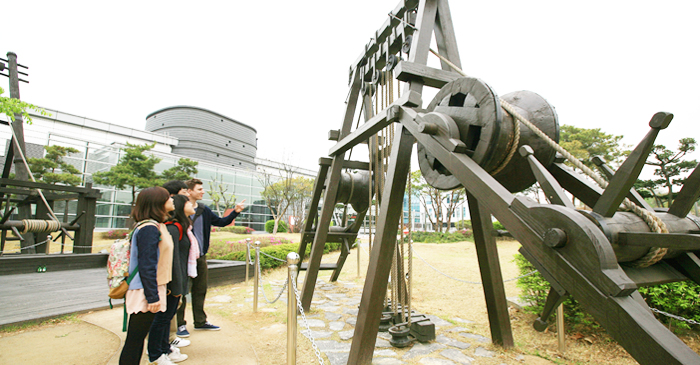 Visitors viewing construction equipment on exhibit outside the museum

The Suwon Hwaseong Fortress was built from 1794 to 1796 during the reign of King Jeongjo, the 24th King of the Joseon Dynasty, and was officially inscribed as a UNESCO World Heritage site in 1997. The fortress was built in just over two and a half years using state-of-the-art equipment at the time, such as a special cranes and cable systems. The fortress features 48 surviving facilities, including the Hwaseomun, Paldalmun, Janganmun, and Changnyongmun Gates. The fortress measures 5.7 kilometers in circumference and the fortress wall makes a nice walking trail. It takes about 3 hours to walk around the fortress past the four gates. If you don’t have that much time, then begin at Paldalmun Gate and go past Hwaseomun Gate, Janganmun Gate, and Changnyongmun Gate. This course is about 3 kilometers long and takes 2 hours maximum. The course will take you to Seojangdae Pavilion and all four gates. Seojangdae Pavilion, the western command post, is situated on top of Paldalsan Mountain at the highest point of all 48 facilities of the fortress. One may go up from Paldalmun Gate along the fortress or begin from Hwaseong Haenggung Palace and go up on a steep trail. From the top, visitors can get a splendid view of the fortress and Suwon downtown area. 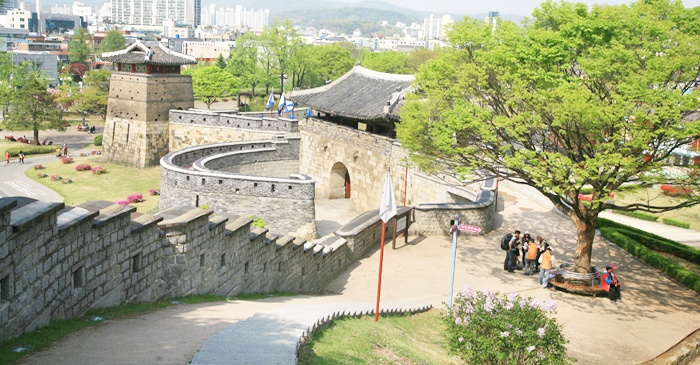 From Seojangdae Pavilion, the way to Hwaseomun Gate is downward-sloping. Then, the path to Yeonmudae is flat along the fortress wall. Hwahongmun Gate and Banghwasuryujeong are the highlights of Suwon Hwaseong Fortress. Hwahongmun Gate features seven rainbow arches that allow Suwoncheon Stream to run through the fortress. Banghwasuryujeong was the site from which area surveillance was conducted and the military commanded. Banghwasuryujeon sits above a beautiful pond and garden where you can enjoy a break while you take in the view. Also recommended is the Hwaseong Dragon Train, which goes around the fortress. The tour car operates on the road by the fortress walls from Seongsinsa Temple on Paldalsan Mountain to Yeonmudae, and makes for a quick, yet enjoyable, way to view the fortress.

Hwaseong Dragon Train going around the fortressArchery program at Yeonmudae

Permanent performances are organized in front of Sinpungnu, the main gate to Hwaseong Haenggung Palace. The 24 martial arts demonstrations are held from Tuesday to Sunday every week at 11 A.M. and 3 P.M. The Jangyongyeong Guard Ceremony is held at 2 P.M. on Sundays. Visitors can take photos with the guards after the guard ceremony. The Saturday performances at 2 P.M. offer a variety of traditional performances, such as a royal dance and a tightrope dancing performance. Near Hwaseong Haenggung Palace are the Art Workshops Street and Mural Streets in Haenggung-dong. One can rent bicycles at Haenggung Plaza (ID card is needed) to cruise along the fortress wall area and through the Mural Streets. 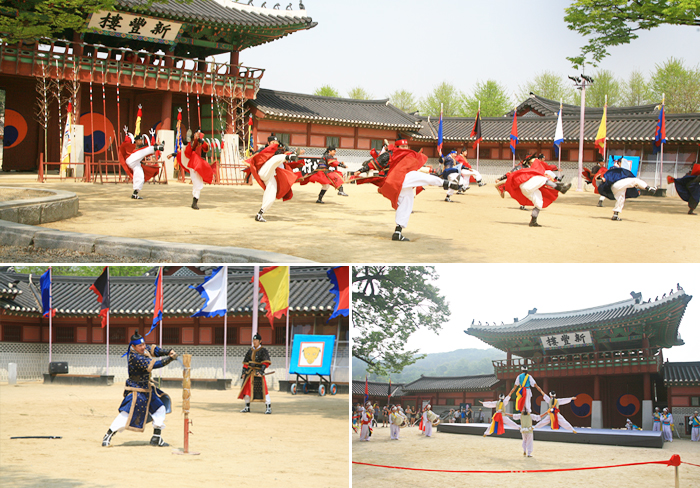